The development of an effective HIV vaccine represents the most promising approach to end the AIDS pandemic, and this will almost certainly require the generation of long-lived antibody responses. Humoral long-term immune responses are provided by plasma cells and memory B cells, both of which arise from the germinal center reaction within the lymphoid follicles. This process is critically dependent on follicular helper T cells (Tfh) that provide signals markedly impacting the respective antibody response function, subclasses as well as longevity of the humoral response.

In this project, we plan to determine the impact of the glycan shield of HIV’s envelope protein (Env) on the fidelity of Tfh-mediated processes in the context of different HIV vaccination strategies. We hypothesize that this large glycan shield is a major factor mitigating and modulating the development of memory induction for humoral immune responses. A large fraction of the surface of Env is shielded by N-linked glycans and immune responses against carbohydrates are generally poor and not long-lived. Indeed, it has been demonstrated that carbohydrate antigens can activate a T cell-independent pathway that involves extrafollicular B cells by cross-linking BCRs. In the absence of CD4 T cell responses, however, longevity of B cell responses is only poorly induced. To test this hypothesis we will genetically engineer Env vectors with different levels of glycosylation by modification of N-glycan binding regions. We will then test the capacity to induce humoral and cellular immune responses in in vitro models and in mice, and will assess their longevity. 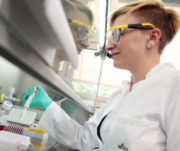