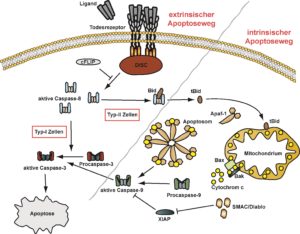 Death Receptor 3 (DR3) belongs to the subgroup of so-called death receptors among the Tumor-Necrosis Factor (TNF) superfamily. DR3 is primarily expressed on the surface of leucocytes and has a fundamental role in polarization of the T-cell response, T-cell hemostasis and T-cell-mediated immune responses against bacteria, viruses and parasites. In addition, the TL1A/DR3 system has been implicated in the pathogenesis of chronic inflammatory diseases such as Morbus Crohn, ulcerative colitis or rheumatoid arthritis. Interestingly, new studies also indicate a contribution of DR3 in athero- and tumorigenesis.
To date, signaling events emanating from DR3 are only poorly understood. Binding of TL1A to the corresponding receptor DR3 on the one hand triggers activation of proinflammatory pathways such as NFkB and the MAPK p38 and JNK. On the other hand, DR3 is capabel of inducing apoptosis via the activation of caspases.
We could recently show that ligand-induced DR3 activation is mechanistically comparable to TNF-receptor 1 but fundamentally differs from other death receptors such as CD95. Perspectively, this could be exploited therapeutically. Moreover, our lab described for the first time DR3 as necroptosis inductor. Establishing a DR3-triggered regulated cell death pathway in addition to apoptosis potentially extends the patho-physiological role of the TL1A-DR3 axis.

Crosstalk of DR3 with other signaling pathways

In most (patho-) physiological situations, a cell is not exposed to only one stimulus, but encounters various stimuli at a time. Consequently, this lead to activation of multiple signaling cascades, which in turn can modulate each other. This project investigates the effects of simultaneous activation of different signaling cascades on DR3 signaling.

TL1A and DR3 play a decisive role in mounting and sustaining an inflammatory response. However, the underlying mechanisms and the exact contribution of different subsets of immune cells is to date not clear and will be addressed in appropriate mouse models.